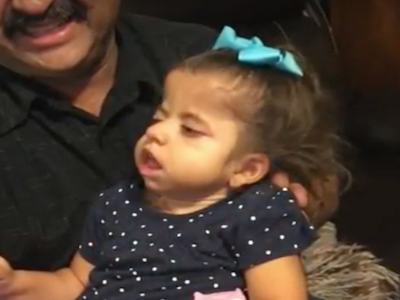 The purpose of the meeting is for her family to discuss the use of medical marijuana so Sadie can legally get the treatment she needs for her rare condition – Schinzel-Giedion syndrome.

Sadie’s condition leads to over 300 seizures a day, intellectual disability. Soon after getting the diagnosis, the only approved treatment option offered to the family was a medication that would alleviate some of her pain but not change the symptoms nor the prognosis (death).

Sadie’s Search For a Treatment

Sadie’s father Brian, while conducting his research on treatments for epilepsy diseases, came across medical cannabis and initiated his search for places that would treat his daughter.
Most doctors and clinics refused Brian and Sadie because she was an infant.
Eventually, Brian found a physician in San Diego who provided Brian hemp-derived cannabinoid oil as a treatment for his daughter. After her first dose, the family immediately saw changes in their daughter. In just minutes Sadie’s eyes stopped twitching. After a second dose of the cannabinoid oil, her entire body stopped twitching.
Sadie’s health had continued to improve. Just 2 months after receiving the hemp oil, Sadie went for her for a routine appointment with her radiologist and her tests showed that her tumors were regressing.
Even with the positive signs of curing her disease, Sadie’s doctors explained to Brian that cannabis treatments are classified as a Schedule 1 drug, meaning they are illegal because they have high abuse potential, no medical use, and severe safety concerns.

That is why Sadie’s parents are calling upon the Make-A-Wish Foundation to help connect them to President Trump to discuss changing this classification.
President Trump has been vocal in the past about allowing states to create medical marijuana programs.
Removing cannabis and cannabinoid oils from Schedule 1 status will encourage and allow further research into its medical potential and increase nationwide access to medical marijuana.
The Higuera family has also started a campaign on Change.orgto sign up as a supporter of their mission and on Twitter by using #SadieMeetsTrump.

Schinzel-Giedion syndrome is a severe condition that is apparent at birth and affects many body systems. Children with Schinzel-Giedion syndrome have severe developmental delay. Other neurological problems can include severe feeding problems, seizures, or visual or hearing impairment.
Most affected individuals do not survive past childhood.
Read original article here